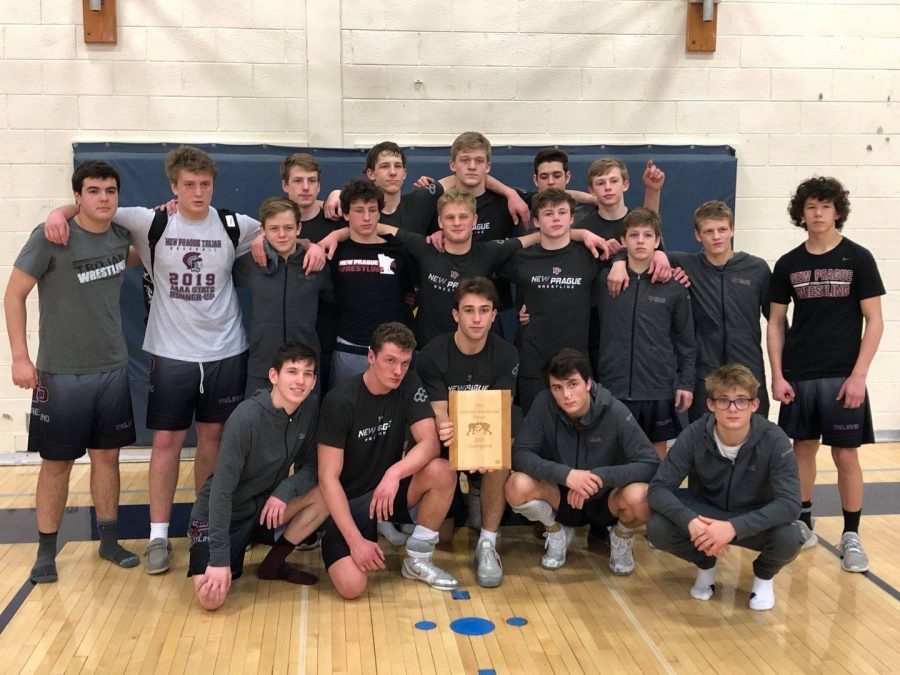 Trojan wrestlers took the championship at the Zelinski Memorial Dual Tournament at Whittnall High School in Greenfield, WI the weekend of January 24-25. In the championship round, New Prague defeated Mukwonago, WI (#1 team in WI’s Division I) by a score of 40-28. Trojans won the tourney going 5-0!

This winter, New Prague Trojans set a new school record. Trojan wrestlers finished the season 28 and 2! Assistant Coach and Social Studies Teacher Mr. Schoenecker said, “We knew these guys were gonna be good for a long time. The seniors who had succeeded matched up with some talented underclassmen; we knew it was coming.”

Both he and varsity wrestler Jake Trachte noted that in one of their tournaments, they were ranked fourth and went up against the second-ranked St. Michael Albertville for a nail-biter. The two teams played so closely that they tied in points, as well as six other tie-breaking categories. Eventually, the whole team was stunned to learn they actually lost based on the seventh criterion: the winning team is the team who scored points first in the match. Despite losing to St. Michael Albertville, the team was immensely successful, sending seven of the guys to state. Click here for more information on the results of the state competition.

This year’s captains were seniors Jake Trachte, Will Busch, and Jay Skoegerboe, as well as junior Nick Novak. Trachte noted that Novak’s experience as a captain this year will really benefit the team next year as a returning captain, ensuring the team will have the talent as well as the experienced leadership to keep the program successful after the departure of the senior bunch. The team was coached by Head Coach Dan Wagner, Assistant Coach Nick Schoenecker, and coaches Schetka, Doerty, Schmitz, and Woodyard.

Trachte described the unique feeling wrestlers experience out on the mat: “Right away, right when you get out, you’re nervous. It’s just you and no one else. Not everyone’s watching you in football, but on the mat, all eyes are on you.”

Wrestling, like many sports, has a strong team unity, but during the matches, you’re all alone up against the other guy. Wrestling gives athletes a unique challenge in this sense. Schoenecker admitted he “prefer[s] sitting in the coach’s chair because there’s a little less pressure, fewer eyes on you.”

Schoenecker also noted coaches experience a rewarding feeling as they watch the boys working hard within the weight room and practice, and translating that into success on the mat. This season was great, and the coming seasons look promising as well. Congratulations Trojan wrestlers, and good luck next season!