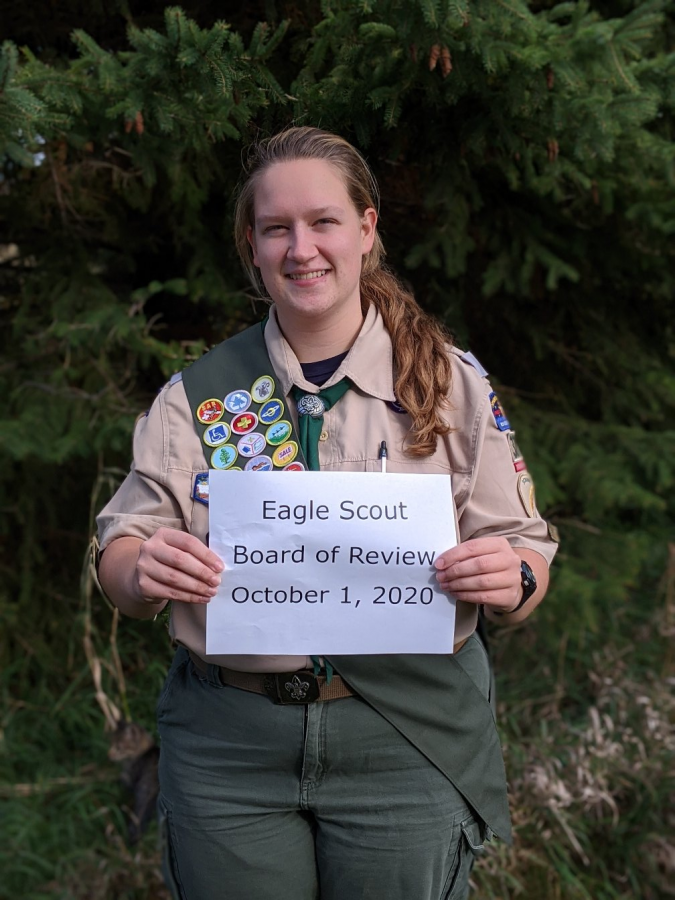 Rebecca Meger was one of the first female scouts to earn Eagle Scout honors in the state of Minnesota.

On October 1st, New Prague High School senior Rebecca Meger became one of the first female Eagle Scouts in history, which is the highest rank a scout can earn. Only 4% of scouts earn this rank. To receive it, a scout must earn at least 21 merit badges, take on leadership within their troop, and complete many hours of community service. They also must plan, organize, and lead an Eagle Project.

Meger joined Lonsdale Troop 327 on February 1st, 2019, at the age of 16. This was the very first day that girls were allowed to join the Scouts.  To give her an advantage, Meger had been in the Adventuring Crew since the age of 14, so she had experience with camping, cooking, and tying knots. Meger earned her first merit badge on February 3rd, just two days after she became a scout. Even though she had just started, it was her goal to make Eagle Scout before her birthday this November. She flew through the ranks of Scout, Tenderfoot, Second Class, and First Class in three months, the exact minimum required amount of time. The first ranks are designed for 12 year olds who have just joined Scouts BSA, so being a 16-year-old with plenty of experience, she was easily able to climb the ranks.

Girls being in Scouts BSA is still a controversial topic. Prior to 2019, the organization was called The Boy Scouts of America. When they allowed girls to join, the name was changed to Scouts of America to be more inclusive. She experienced backlash, but she also experienced a tremendous amount of support from people who wanted her to succeed. There were adults from the Lonsdale, New Prague, and New Market troops offering help. At Tomahawk, she faced both Scouts and parents who did not want her there. Meger was able to spark conversations with them about why girls should be able to be scouts too.

For her final Eagle Scout project, Meger decided to build bat houses for the Webster Township park. This park, like many in Minnesota, has a huge problem with mosquitoes. She took this step because she knew that bats eat mosquitoes, they pollinate, and they are an endangered species. This positively impacted both the environment and community around it.

Meger’s favorite part of Scouts is the interactions she has with people. She taught as a counselor at Tomahawk, in her troop, and at the University of Scouting. She’s found a love of teaching and being outside with hands-on learning. It helped influence her decision to become a teacher in agricultural education.

Meger is a pioneer for both girls in scouting and gender equality. “This organization makes the world’s future leaders. We should want what’s best for our country and have girls be part of the program”.