When the magic disappeared 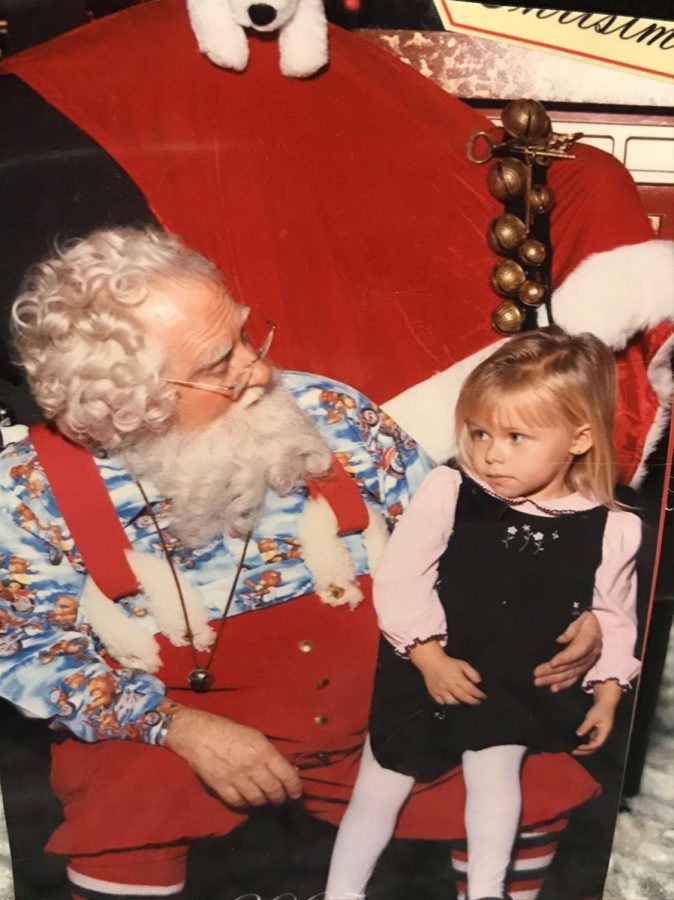 Ava Lyons seems a bit skeptical about Santa at an early age.

In the midst of the holiday season, many children are counting down the days until Christmas, anxiously awaiting their gifts from Santa. Many people grew up believing in Santa, but for most people that believe, there’s a moment when the magic disappears and the truth is exposed. Here is a collection of stories about how different NPAS Staff and Students found out that Santa isn’t real.

Technically [I found out] on the bus ride to Eagle Bluff, when they played Gremlins on the movie screen player things. I saw it coming, but refused it and just covered my ears, but I accepted it in 7th grade when my family went somewhere for Christmas vacation, and I heard my parents shuffling around at like midnight on Christmas Eve.

My friend told me that some kid on the bus said that he wasn’t real. I didn’t believe them until I told my parents about it, and they told me the truth without sugarcoating it in the slightest. I cried. And while they were at it, they told me the Easter Bunny and Tooth Fairy weren’t real. And then I cried more.

I was in 4th grade looking at my family’s Amazon orders, and I scrolled too far down and saw something I got from Santa.

This isn’t really my story, but it is for my youngest sister. She believed in Santa well into middle school, even though lots of people “doubted” him as she would say. She finally asked me to tell her the truth one Christmas Eve, and I just said I will always believe in magic (Big Harry Potter nerd). She said okay, and then went into her closet and whispered, “Okay Santa, if you are real, I want ice skates.” I immediately panicked as ice skates were NOT something on her list. My mom somehow managed to find ice skates on Christmas Eve, and watching my sister open the ice skates on Christmas Day will be a memory I cherish forever.

I just found out last year. Around 11 pm on Christmas Eve, my mom was asking me to help her set Santa’s presents under the tree, and I asked, “How did you get those?” She looked back at me like I was an idiot. I legitimately believed in him until last year.

I was watching the movie “Grown Ups”, and [after] the part where the little girl finds out the Tooth Fairy isn’t real, I turned to my mom and asked her if the Tooth Fairy was real, and she said, “No.” Then, I connected the dots to the rest: Santa, Easter Bunny, etc.

Cain, my oldest son, was hinting around that he didn’t believe in the Easter Bunny or the Tooth Fairy for a while. It was no surprise as my husband Terry and I always forgot to put it under the pillow, so lots of times we did it the next day and said the Tooth Fairy must have been busy last night…. Anyway… Santa…. I was behind Cain and Terry was in front of him and we were going to verify that there was no Easter Bunny or Tooth Fairy, and all of sudden Terry told him there’s no Santa either… I was waving my arms behind him, mouthing, “What the heck? We didn’t talk about this.” Cain seemed kind of upset, and like the good mom I am, I said, “Well, Cain, you already knew there wasn’t an Easter Bunny or a Tooth Fairy. Is it that big of a stretch to think there’s no Santa?” I assured him he’d still get gifts and that he could be in charge of hiding JT…our elf on the shelf (I hate hiding that thing –being creative is torturous for me). Harty now knows too. I don’t remember that story as well. They both do a good job hiding the elf, which is good for both of us. The twins know there is no Tooth Fairy already. We told them this summer, but they claim to still believe in Santa. I think kids are afraid to admit there’s no Santa because they think they won’t get a gift.

I was in 5th grade, walking the dog with my mom and she said,”Sooo… you know that it’s just your dad and I right? You know Santa’s not real?”

I found out from the process of elimination. Like, I’m ten years old, and this makes no sense.

My oldest brother, Shaun, 10 years older, pulled something out of his stocking when I was in second grade, and my mom said she could return it. DING! Even though I was so into Christmas and Santa, my little bell rang and the light went out.

I was told in fifth grade by friends. Actually, it was probably sooner.

My mom has very unique cursive handwriting, so when I noticed the tag “To: Lindsay  From: Santa” in my mom’s beautiful writing, I knew it was over. Because of this distinct childhood memory, we do not write on the gifts to my children that are from Santa. Instead, each child’s gifts are wrapped in a wrapping paper design specific to that child!

When I was 7 or 8 (I am the youngest in my family), I got this awesome Barbie RV that I had really wanted. As I was looking through it I noticed that a seatbelt was missing and said something. My mom shot my dad a look, he mumbled under his breath and ran out to the garage. He returned with the missing seatbelt. I knew right then. My sister who is 6 years older than me said something along the lines of, “Finally, we don’t have to pretend anymore.” Crushed.

When his beard fell off.

Version 1:  I don’t ever remember believing in Santa. My mom tells me that my grandpa told us the truth before we could even talk. I was the kid that told all the other kids that Santa wasn’t real. My mom was not happy about either of these events.

Version 2: What?!!! I always believed that if I just kept believing, he would keep coming. And he did, until I was 35. When I was 35 and had my first kid, my mom finally cut me off. She told me that if Santa was going to come for my kids, he wasn’t coming for me. Oh and by the way, I have to be Santa now.

I connected the dots after accidentally finding the Easter Bunny gifts in the back of my mom’s van one Easter.

I knew for sure Santa wasn’t real the year my mom wrapped Santa’s presents in the same wrapping paper as the gifts she gave to us. I actually remember feeling really proud of my detective skills and passed on my knowledge to my younger brother.

I was writing my Christmas list for Santa when I was 9. I asked my mom for a piece of paper to do so, and she

said, “you still believe in him?” I cried myself to sleep.

I think I knew in Kindergarten, the story of a fat man coming down our chimney to give us stuff was bogus to me, but by second grade it was confirmed. As friends at school, we all talked at recess and decided it wasn’t real. Santa was done. No big deal, I’ve always thought snow to be more magical than Santa.  🙂