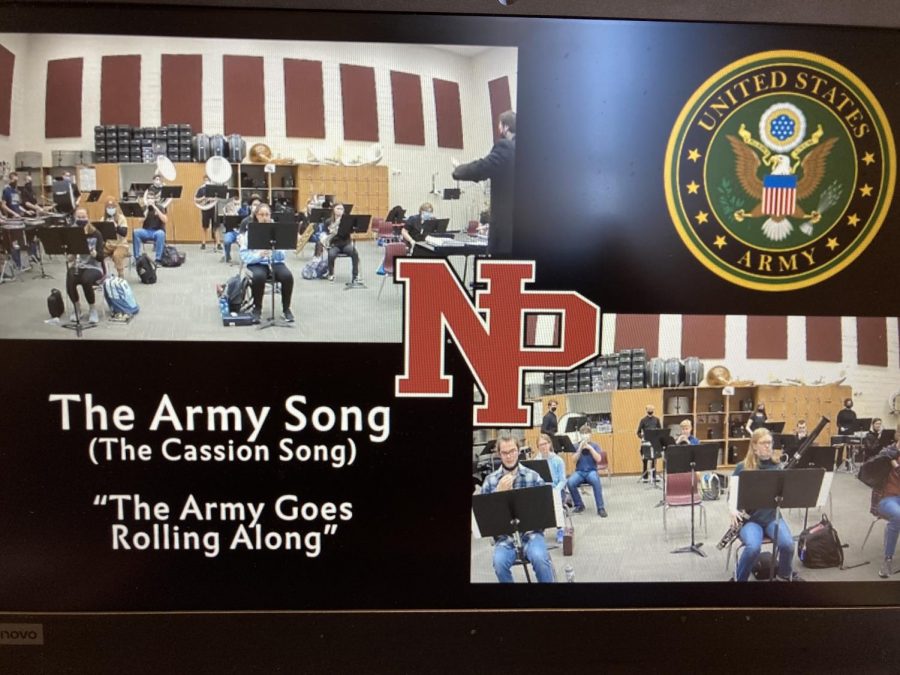 The band joined in to perform for the virtual ceremony.

COVID has affected all of us in some sort of way. While some classes were not affected much, for others it has changed their class entirely. One of those departments is band. Crimson band, Symphonic band, and Wind Ensemble have all seen major changes due to COVID.

The bands started off the year with bucket drumming and music theory lessons. These were things that could be done socially distanced and safely. Later on, Mr. Diischer ordered “Bell Covers” which are specially designed covers to catch potential vectors of COVID that are spread by using air to play wind instruments. This allowed students to play in Band class for a short time before moving into the full distance learning model.

People sign up for a band class to play, and the Wind Ensemble did that for Veteran’s Day when they performed “Salute to America’s Finest.”  To create that video, Mr. Diischer said, “What I have the Band students do is play along with the ‘track’ of the Smart Music recording. They will record their video and audio, and upload it to Google Classroom. From there, I can download all the videos and input it into Adobe Premiere Pro. I then ‘align’ all the parts of students playing. Sometimes, this will involve cropping student faces and their instruments, so that they are the most prominent item in the shot. After that, I take the sound recordings, and mix them into a sound editing software. From there, I can take individual sounds, and blend them together to recreate as much of the Band Room/Auditorium sound as possible.”

What Mr. Diischer has done allows students to keep playing their instruments at home. The students all meet up in a “group rehearsal” Google Meet, with microphones off, except for Mr. Diischer’s. The students then go through musical exercises with Mr. Diischer. He uses a Mini Keyboard and the Octa-pad which allows him to send musical sounds through student computers, so students can hear their parts or the music they play together. In addition, they use a robust software tool, called “SmartMusic,” which allows students to hear a “full band” accompaniment, as well as their parts on musical exercises and full pieces of music.

When asked why he does all of this he responded, “The goal is to try to make the home classroom as similar to the home classroom as possible, even if it can’t 100% match what we do in school. While it may not be perfect, I know that having students play their instruments during this time will allow them to continue to grow in their musical skills, and enjoyment of music.”